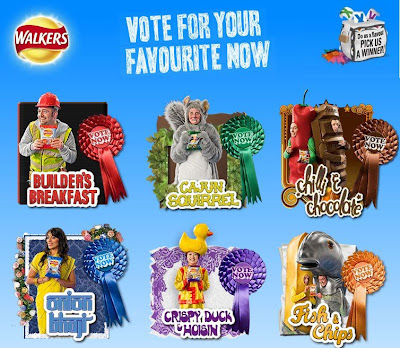 Apart from their initial mistake in not short-listing our flavour suggestion (pepperoni pizza), we were all rather excited about the Walkers Competition. Not only did it present us the opportunity to snuffle lots of snacks, it also gave us the chance to launch our first poll. (see results post)

What a great idea we thought, what could be suggested? It was on the tips of our tongues. And here it stayed until the Playdoh flavoured tongue abuse of Chilli and Chocolate prompted us to spit it back out again.

Personally I’m rather glad the Chilli and Chocolate variety tasted so rank and thus rendered itself un-votable. The man on the website in the Chilli costume looks quite disturbing in profile and I don’t think he should be encouraged, especially when embracing his chocolaty mate. That said Fish looks rather pleased to see Chips as well.
This we decided was also equally yucky, along with the horrendously eggy Builder’s Breakfast.

But enough about the packets we tossed aside, what of those we loved? Well despite its random selection and blatent packaging fib* Cajun Squirrel wasn’t half bad. Though it tasted a bit too much like run of the mill sausage for us, so no vote.

So now you know where the Vue vote was cast, do you agree with us? Cast your vote and let us know what you think in the comments section below.

* “no squirrels were harmed in the making of this crisp” I can’t believe that. Surely one must have been as a point of flavour reference? Unless they’re trying to tell me Linekar snuck around licking New Orleanian Squirrels in the name of research!

Leave a reply Click here to cancel the reply