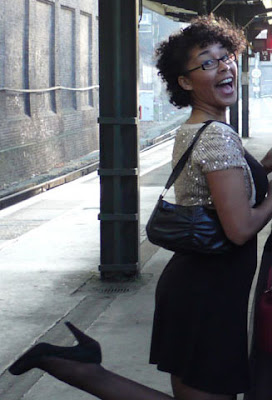 For those of you that don’t know, Vue staffer and general ray of sunshine, Gemma John left the world of advertising last summer on a much nobler and more charitable pursuit.

A regular volunteer for the Charlotte Miller Art Project, a charity set up in memory of her friend, Gemma was invited to join their teaching programme as part of the CMAP Juconi project in Ecuador. And being the truly lovely person* that she is she jumped at the chance.

After a mammoth fundraising effort, a fantastic print auction, a lot of help from her sock monkeys and £6k in the CMAP piggy bank, she was off on her way last September.

Vue are pleased to report that after 6mths in Ecuador Gemma is now launching a pilot CMAP project in Mexico.
Understandably we’re rather glum we won’t be seeing Gemma for a few months more but with the Karmic Offsetting* options now open to us and the ad work we’ve got on, it’s probably for the best.

You can follow her exploits on the CMAP blog.

*Her middle name is Angell, Mother Theresa’s was Gonxhe. Need we say more!
*Karmic Offsetting – where one member of your circle partakes in worthy causes whilst you continue to feed the advertising beast.

Leave a reply Click here to cancel the reply